This study discusses the 'Ali Asyri Zaid’s opinions on the history of Balaghah Science. Given that he has quite different views from his predecessors such as Syauqi Dzaif, al-Maraghi, and so on. On the other hand, balaghah study which is now weakening has become a serious concern for researchers to study balaghah history. In examining Zaid's opinion the researcher uses the theory formulated by Gracia in interpreting texts based on historical aspects and the meaning of texts. Researchers not only describe what Zaid has explained, but also try to interpret what he has described in his work. The results of the study conducted by researchers is the beginning of the emergence of study Balaghah marked by the thrill of kalam scholars in studying the miracles of the Qur'an. miracles that concern the scholars of kalam at that time is majaz Alquran which in fact is one of balaghah studies that have been stable and tend to stagnate in the modern era. According to Zaid the phenomenon of the rise of balaghah is divided into three phases: (1) the emergence phase (an-Nasy'ah) is marked by the Book of Majaz al-Quran by Abu Ubaidah Muammar ibn al-Matsna, (2) the stage of perfection (at-Takammul) Book of an-Nukat fi I'jaz al-Quran by ar-Rumani, and (3) stable phase (al-Istiqrar) characterized by a great scholar Abdul Qahir al-Jurjani who wrote the Book Dalailu al-I'jaz and Asraru al -Balaghah. 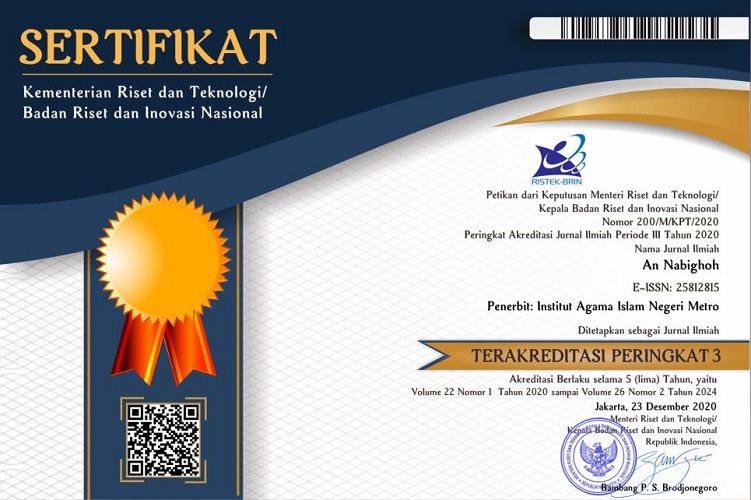 An-Nabighoh is licensed under a Creative Commons Attribution-ShareAlike 4.0 International License.